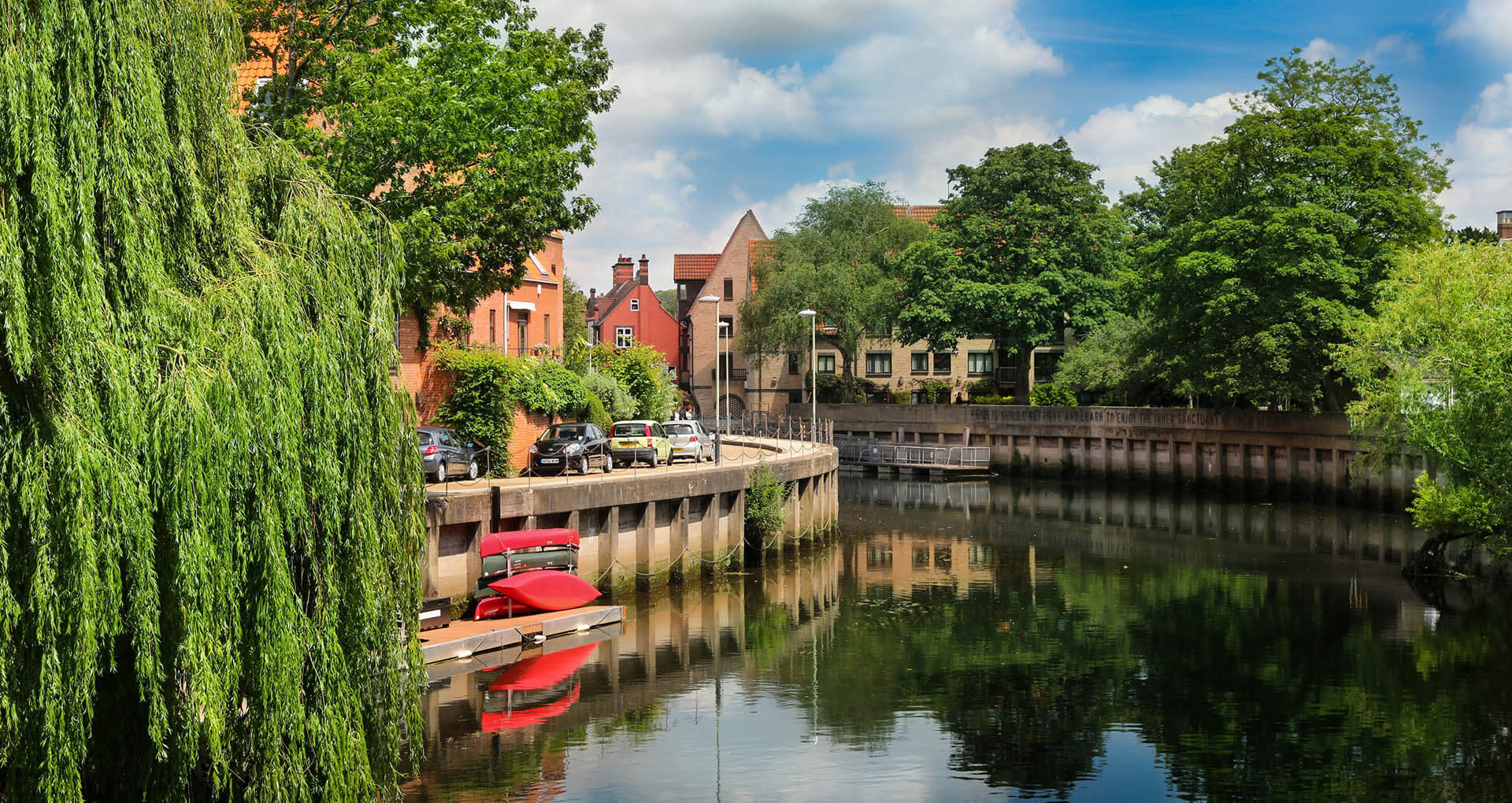 Norwich is the administrative centre and county city of Norfolk.

The city's economy was originally chiefly industrial with shoemaking being a large sector, which has changed throughout the eighties and nineties to a service-based economy. Aviva, formerly Norwich Union, still dominates these, but has been joined by other insurance and financial services companies such as Virgin Money and Marsh.

In 1999, the former Boulton and Paul site was redeveloped into the Riverside entertainment complex. It now features many restaurants, bars and entertainment for all ages. Nearby, the football stadium has been upgraded with more residential property development alongside the river Wensum.

Archant is a national publishing group that was has grown from the Norwich City’s local newspapers, the Eastern Daily Press and the Norwich Evening News. Archant now creates the newspapers for most of Norfolk and they also run their own TV channel, Mustard TV.

Norwich is often associated with the manufacturing of mustard. In 1814 the now world famous Colman’s brand of mustard was founded which continues, to this day, to operate from its factory at Carrow. Now owned by Unilever, Colman’s is exported to countries across the globe which puts Norwich on the map of Britain’s heritage brands.

From Norwich’s rail terminal at Thorpe Station you can access the rest of the country by taking the train to the London Liverpool Street Station or to the Peterborough Station. The station is run by Abellio Greater Anglia who also operate local lines to popular destinations such as Great Yarmouth, Lowestoft, Sheringham and Cambridge.

Norwich is served by many bus operators with good coverage of the local area. Most bus and coach services run from Norwich bus station in Surrey Street or from Castle Meadow in the city centre.

Norwich International Airport is a feeder to KLM's Amsterdam hub. Norwich is served by multiple airline companies such as FlyBe, Bristow Helicopters and Eastern Airways. Norwich also has a strong business in chartered holiday flights.

Norwich is a tourism capital for Norfolk and holds many great attractions such as the Norwich Lanes and the city’s many museums such as the Castle Museum, Dragon Hall, The Royal Norfolk Regimental Museum and Cow Tower.

Norwich is also the shopping capital of Norfolk.

In 2005, Norwich’s second mall opened its doors and was hailed as a major new shopping experience. The Chapelfield shopping mall has since became one of Norwich’s main shopping hubs and sees over 11 million people entering its doors each year.

Norfolk as a whole is a popular tourist destination due to the Norfolk Broads which are one of the UK’s most famous national parks, the many tourist attractions of Norwich and the many beaches of Norfolk such as the outstanding beach at Sea Palling which is only 20 miles from the city centre. Another main tourist attraction is Sandringham House, which is the countryside retreat of Queen Elizabeth II. The house and its beautiful gardens are often open for visitors to walk around throughout the summer months. Many city dwellers also purchase weekend homes in Norfolk’s rural villages such as the area around Burnham Market.

Search our database of properties for sale and to let in Norwich, Norfolk and surrounding areas.

How can we help?

Edit this part using SiteBuilder in Site text and localization

You can register here!